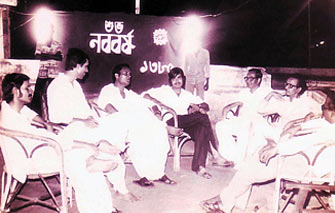 My tryst with theater and Durga Pujo!

I often say I went to Vizag or Vishakhapatnam in 2 legs, but I left in 8 legs. Vizag is one place very close to my heart, primarily because this was the site that gave me most of my personal life and memories that I would cherish for the rest of my life. From my marriage to my twin sons, Vizag indeed made my family complete. And that’s how my two legs grew to eight!

When I first landed in Vizag I was a bachelor and after office, I had almost the whole evening to myself and often wondered what should I do? At times I rode a new motorbike that I bought and went to the sea beach to laze my evenings away. But that too cannot be done everyday. I had no company after office, hardly any friends with whom I could chat or any families who would welcome me to their homes over a dinner. Hence, I kept asking my neighbours if there was any Bengali Association in Vizag, where I could join and pass my evenings in the company of my tribe.

And yes, there was a very vibrant Bengali community in Vizag. It was in an area called One Town, in the old quarters of the city on the second floor of a two-storied building. One had to climb a wooden staircase to reach the top and rows of Bengalis in their typical pajama-panjabi would be busy in their adda sessions over cups of tea and a game of chess or otherwise. It was almost like a Mini Bengal in the heart of South India. The place also had a library and a pantry. It was at Vizag’s Bengali Association, where I met Snehamay Nag, a few years older to me, who was also a bachelor like me and worked with ITC. We instantly connected and spent our time after office in fun and frolic.

Bengali Association used to stage plays during the Durga Puja celebrations and for me that was big time entertainment. Their Durga Puja was itself rich in history, the oldest puja in Vizag, the first Sarbojonin Durga Puja that was held since pre-independence era, that is 1941. In 1953, it was moved to Vizag’s iconic Victoria Memorial Town Hall. The place went abuzz with excitement during the puja days, with everyone participating in decorations, plays, cultural programmes etc.

Every day’s programme was divided into morning and evening slots. Morning slots were reserved for children and women with many competitions thrown in. Evenings were for staging of plays by well-known theatre groups from Kolkata or even Delhi. The days would round off with Bengali movies being shown on reel movie projectors. That’s how Vizag’s Bagaliyaana would bloom during those 4 days of Durga Puja. The locals also got a chance to showcase their talents and we, the members of the association staged plays on our own.

I loved acting and Snehamay usually directed the plays. Once we decided to kick of the festive season with Bidhayak Bhattacharya’s Tahar Naamti Ranjana and end the season with Manoj Mitra’s Sajano Bagan, also popularly known as Banchharamer Bagan. I was casted in both and in lead roles. Tahar Naamti Ranjana was big time hit though it was a challenging play and had several characters intertwined under the garb of a simple story. Those who have heard Sambhu and Tripti Mitra in this radio play, would understand what I am saying. Because the ideology of the story was very complex and the storyline apparently simple, since one had to delve into the character of the protagonist, the murder convict and the female character who is in search of her long lost brother.

For days me and Snehamay debated on how to write the script and dialogues. And finally when staged, it was lauded. Hardly did I know then that soon a Ranjana would come into my life. My tryst with theatre at Vizag was something I loved. I also loved playing Table Tennis. This is one game that I was very good at since my IIT days. I was the IIT Hall Champ in Table Tennis and loved playing it for the rest of my life. Infact, I often played TT at Bengali Association. Games and Theatre would always be very close to my heart, just like my profession was.