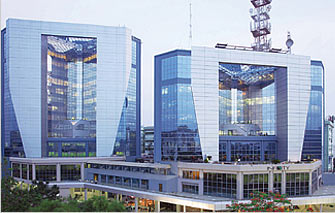 How I made Kolkata’s first 21st Century Building --- The Infinity

It’s often said ‘Sky is the Limit.’ But I have forever delved beyond the sky, to the infinite clouds whose fragility did not deter them from crossing formidable mountains. And just like those clouds, I have always dreamt infinite. The power of that dream changed into reality when in February 2000 the first ‘Intelligent’ building of India – ‘The Infinity,’ was unveiled in the backdrop of a symphony of sunset and world class modern technology, with the then Chief Minister of West Bengal, Jyoti Basu, setting all the 11 floors of the 150-feet Infinity building alight with the click of a mouse. A new horizon in the history of Information Technology in Bengal started thus and I was happy to be instrumental in bringing in that technology during an era when it was literally unheard of in India.

I don’t recollect if I met Nandan Bhattacharya and his team of directors of Webel at a restaurant or a club, but I do remember him explaining how Webel was planning to set up an ‘Intelligent Building’ in the upcoming electronics hub of Salt Lake. He had shared that they had already earmarked the land for the project that needed to be ready in 3 years’ time. The dream was high-vaulting and I am always drawn to such challenges.

The idea of ‘Intelligent’ buildings had been doing its rounds since the early ’90s and I was so passionate about the idea, that I even travelled to New York and Frankfurt to get first-hand experience of these buildings. Nandan da offered me to set up a software factory in the upcoming building and was ready to give me an entire floor of around 10,000 square feet. He even offered that Webel would take a 20% equity stake in the new company in lieu of it. He gave me the freedom to buy back the shares once the place would get fully up and running.

But I always loved to play it ‘big’ and dream ‘infinite.’ Looking straight into his eyes I proposed: ‘Why just one floor? Why not the entire building?’ And that’s how Infinity happened. The name of the building was suggested by me, as I never saw the building as an infrastructure project, rather I saw it as a beacon of change for a New Bengal. I told that point blank one day while meeting Nandan da who took me to Somnath Chatterjee, who was then a close aide of Jyoti Basu. I told them of my belief that with Infinity, Bengal shall claim its rightful place on the IT map of India. Infinity would create the right work environment for a whole new generation of technology workers.

Accompanied by Somnath Chatterjee and Nandan da, a few weeks later I was suddenly ushered into Jyoti Basu’s chamber and he gave the final nod. Thus, was born Infinity, India’s first truly intelligent workplace, that for the first time reflected the art of ‘plug and play infrastructure.’ It was indeed the precursor of IT parks of India.

Every power system of Infinity was controlled through micro-processor control systems, through security signals mapping human movements, in an age when Artificial Intelligence was a distant dream. The ‘Intelligent Infinity’ created an environment to maximize the effectiveness of its occupants, while at the same time enabling the efficient management of resources with minimum life-time costs of hardware and facilities. As per my mantra, there is no limit… the building was thus properly completely networked, it was green and fully energy efficient.

I had converted the driveways to green patches and coffee kiosks where IT professionals working in Infinity offices could take breaks amidst nature. Even a waterfall in the front greeted them to soothe their tired eyes. I wanted to create an environment where the basic human brain, which creates the technological wonders would feel ease at work and do even better. The ambience and facilities of Infinity ensured optimal output of professionals working from this building. The tower of the building had a ‘brain,’ — which was the integrated computer controlled building automation unit monitoring and regulating all utilities. The building was 100 per cent wired, it was quake proof with sandwiched glass panels to minimize direct solar radiation. Those inside could see the world around, while the outside world was unable to see what was going on inside.

To encourage young entrepreneurs, I had turned Infinity into a ‘high-value’ and not a ‘high priced’ building. From that autumn afternoon of ’96 when I was ushered into the chamber of the Chief Minister to share my dream to build Infinity, to this day, I have always aspired to create a global synergy, sitting right here in Kolkata, and float them across the infinite cosmic energy of the unending Universe.

Infinity was a sort of obsession for me. I could think of nothing, except creating an infrastructure that went beyond the mere boundaries of computer-integrated buildings. My final vision was to have a fully integrated complex with twin 22-storeyed intelli-centres, providing 8,00,000 square feet of laptop ‘plug-and-play’ workplace at the centrepiece of the edifice. I did not stop at that and planned ahead for some 1,200 intelli-homes, each with a global connectivity terminal linked to the workplace for professionals working in high-end and niche technology areas.

By the time I had put the final touches to the plan, the total cost came to a whooping 350 crores and Infinity would spread on a 40 acres of virgin marshland. Money never worried me, I always believed that a project like Infinity would never face a money barrier. However, I was proved wrong later. Raising money was not difficult, what was difficult was whether the one giving the money had the vision to appreciate the project and its future.

I can still feel that magical thrill I felt decades ago, every night, when I drove through the nearly deserted streets of Salt Lake to stand infront of that colossal structure. The sight of the workers milling around like an army of gigantic ants, their yellow helmets glistening made me believe Infinity was a living and breathing organism. And yes, Infinity keeps my dreams alive even today. For I have always dreamt infinite.